Safely access your office computers from anywhere without any additional software.

Do you recognize the following situations?

At such moments, a secure and easy solution to access the corporate network without having to go through the hassle to set up a VPN connection or other complicated software would be an invaluable asset. 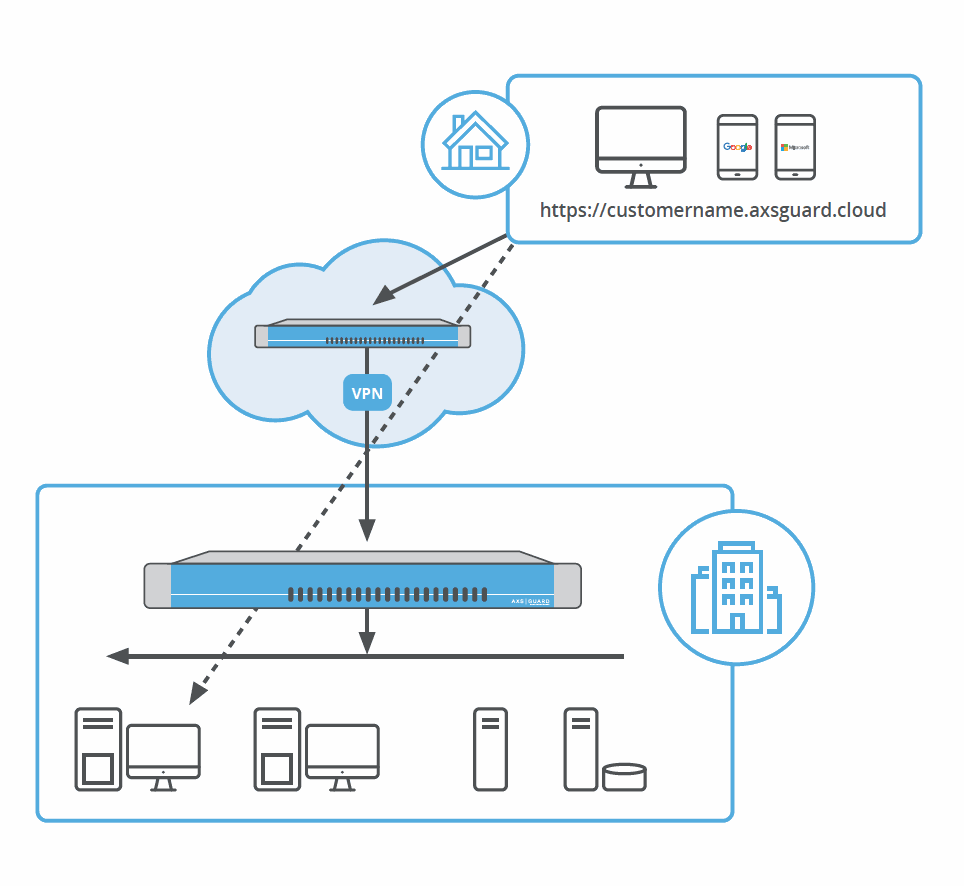 Remote Workspace is a security add-on for AXS Guard. Access policies are centrally managed and tailored to each individual user.

Users simply use a web browser to access their desktop at company headquarters.

The icing on the cake: users don’t need to set up complicated software or a VPN connection.

Only a computer with a recent browser and access to the internet is required.

Network traffic between the user’s browser, the Internet, the corporate network and remote computers is secured by AXS Guard.

All you need is a supported web browser. Start Safari, Chrome or Firefox and navigate to https://<company>.axsguard.cloud. Log in and your desktops and applications will appear automatically. You can then switch to “full-screen” mode, as if you were physically sitting behind the remote computer, even if the remote computer is a Windows-based system.

You can only access desktops that have been authorized by your system administrator. Desktops will appear as if you are physically sitting behind the computer screen of the PC that is being remotely accessed. Programs and files and are not copied to your local computer. In fact, no data is ever transferred from the remote desktop to your private computer, unless you choose to print a document.

3/ What if the remote desktop is powered off ?

Remote systems that are powered off cannot be accessed. However, if the remote computer has entered sleep mode, it can be woken up if its network is available.

yes, off course. You can open multiple windows and even put each window in full-screen mode side by side if you have more than one computer monitor.

5/ Is it possible to access a remote Windows PC from a Mac ?

Yes, this is possible.
The connection between the AXS Guard Remote Workspace and your Mac can be set up for VNC. You can take over any remote computer, as long as you are using a current browser such as Chrome, Firefox, Safari or Edge.

6/ Is there a maximum amount of remote connections ?

AXS Guard - Remote Workspace has no restrictions of its own. However, the maximum amount of simultaneous connections will depend on:

7/ Which desktop will I see, If I access a remote Windows server as a Mac user ?

You will see the desktop of the Windows server. You will also be able to switch to full-screen mode for a better user experience.

Windows uses the RDP protocol. Many versions of this protocol have been released over the years, each time with significant improvements and speed gains.
For best performance, Windows systems running RDP 8.1 and later versions are recommended.

This RDP version is available on Windows 8.1, Windows Server 2012 R2 and later versions of the Windows OS. Windows 10 is preferred.

10/ What about high resolution support, for example when working with AutoCAD?

A higher screen resolution means that more data will have to be transmitted over the connection, which may eventually be saturated if the resolution is set too high. This will slow down remote access to a point where it becomes impractical and even unusable. Resolutions up to 1900x1200 are known to work relatively smoothly if enough bandwidth is available.

11/ Is it possible to print locally and to save documents?

The RDP protocol allows you to print and save documents easily. An additional PDF printer will appear in the printer list of the remote Windows computer, which transparently converts your print job into a PDF document. This document can be saved to your local desktop and sent to your local printer if needed.

12/ Can a smart card reader be used on my home computer ?

This is not supported yet, but we are currently working to find a solution.

13/ Can a user whose PC is being remotely accessed, see and follow what happens?

Yes,  RDP supports "console" sessions which can be used instead of new, "invisible" RDP sessions. The console consists of the user’s screen, keyboard and mouse. This mode allows users to follow events on their PC in real time.